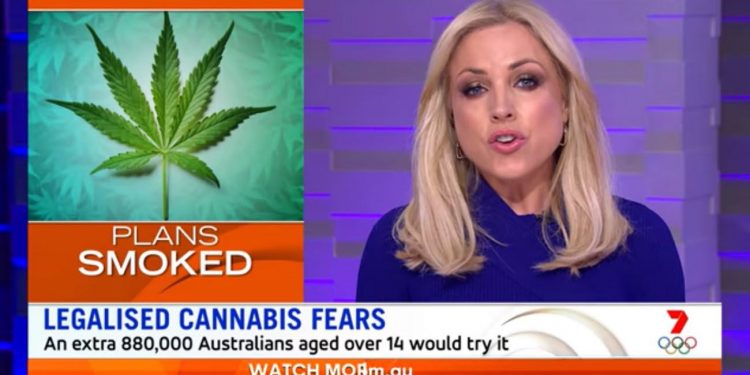 Edwina Bartholomew opened the segment with claims that ‘new research’ has revealed that 880,000 Australians aged 14 and over would try cannabis if it was legalised. And that 500,000 Australians who have used cannabis would use it more regularly if it was decriminalised.

The only people who this strikes fear into should be the alcohol giants, pharmaceutical conglomerates, tobacco monopolies, and international criminal networks. All of these organisations do far more harm to our society compared to cannabis. And more people using legal cannabis means less money for any of them.

Not a single regular Australian should be scared from the results of this ‘new research’ – which simply analysed a report from data gathered more than two years ago. Unfortunately, the complete new research itself is stuck behind a paywall, and we’re not willing to give these fear mongers more money to fund their cause, but a press release covered the basics.

The new research, led by Professor Don Weatherburn of the National Drug and Alcohol Research Centre (NDARC), also urged governments to fund rehabilitation centres with cash from sales of legalised cannabis. While that is a fantastic point to make, surely rerouting the $1.1 billion currently spent on policing cannabis, which results in the vast majority of arrests being made on consumers, would be more than enough to cover the costs of health programs. Then just think what all that extra money (an estimated $2 billion a year) made from legalised cannabis could be used on – schools, hospitals, aged care – you name it.

Not only would we be able to fund a variety of community programs, but we’d also rid Australia of the thousands of illegal cannabis grow houses around the country – set up in neighbourhoods, industrial parks, and sometimes right next to high schools with kids walking past them every day.

The Australian government itself has stated that the cannabis market is ‘large and relatively stable’, despite police spending hundreds of millions of taxpayers dollars seizing huge amounts of cannabis which seem to have zero effect on the market. Where is the sense in that?

Keeping cannabis in prohibition makes absolutely zero logical sense. It’s been used by humans for thousands of years, and some Australian critics even mentioning that “records show that authorities could not see any particular reason to ban the drug” when the country first outlawed the drug just over a hundred years ago.

Thankfully, change is coming thanks to the efforts of people like Western Australian MP Brian Walker of the Legalise Cannabis WA Party.

This will happen. It’s only a question of when, not if.

Unfortunately, sparking reasonable debate with Labor or Liberal seems to be quite a challenge.

Mike is one of the lead editors at Pondering Pot. He's an advocate for legalising cannabis in Australia, and covers much of the latest cannabis news in the country.